Three of the seven biogeographical regions in the world (Mediterranean, Euro-Siberian and Iran-Turanian) are located in Turkey. Each biogeographic region has its own unique ecosystems. This extraordinary diversity of ecosystems and habitats also hosts significant species diversity.

In order to understand the richness of Turkey in terms of plant (flora) species, it will be sufficient to compare it with the European continent: While there are 12500 gymnosperm and angiosperm plant species in the whole European continent, it is known that there are close to this number (about 11707) in Anatolia alone. Approximately one third of these are endemic species to Turkey. Turkey is also the only country where three out of eight gene pool centers in the world intersect and this almost makes our country a continent in terms of the number of species.

Turkey's rich and unique biodiversity is supported by conservation and monitoring activities and transferred to the future in line with the understanding of common welfare and common health.

Turkey conducted the most comprehensive biodiversity study in the country’s history and defined 13,404 species across 853,000 observation spots, including 12,141 plants and 1,263 animals. More than 3,700 among them are endemic to Turkey. The inventory helped create a biodiversity map and made contributions to the scientific community through the discovery of new species.

The Noah’s Ark database will both provide data for scientists and the business world, allowing for the use of plants in diverse sectors from food to medicine, painting materials, energy and defense.

Turkey studies for the endangered species and locations with high biodiversity were under constant observation, and currently 331 floras and 229 faunas are being monitored for preservation. He noted that there are also action plans for 100 species which are endangered or at risk of becoming endangered

In order to regulate the procedures and principles related to the works and transactions related to support, the "Communiqué on the Support of Balloon Fishing" for the year 2021 was published in the Official Gazette on 27 June 2021 and entered into force.

Since the introduction of lion fish, which is an invasive species in our country's seas, for human consumption will benefit both the ecosystem and the country's economy, in addition to our scientific research, Turkey organizes activities to bring this species to human consumption with scientific institutions and non-governmental organizations, and studies are carried out to have the lion fish take its place in restaurants and kitchens. In this direction, studies are carried out to develop policies regarding the protection of aquatic biodiversity and habitats, reduction of chemical pollution, control and management of aquatic invasive and alien species, and ensuring the continuity of the society's access to healthy fishery products; Within the framework of the developing conditions in our country and all over the world; In addition to our existing legislation, studies are carried out to combat aquatic invasive alien species more effectively, both in order to prepare the legal basis and to harmonize with the European Union acquis in the process of accession to the European Union.

The project is aiming to ensure resilience of ecosystems and the protection of local / endemic species by taking invasive alien species under control, determining threats, reducing effects and preventing entry in terrestrial areas and inland waters in Turkey, in line with the EU Regulation 1143/2014 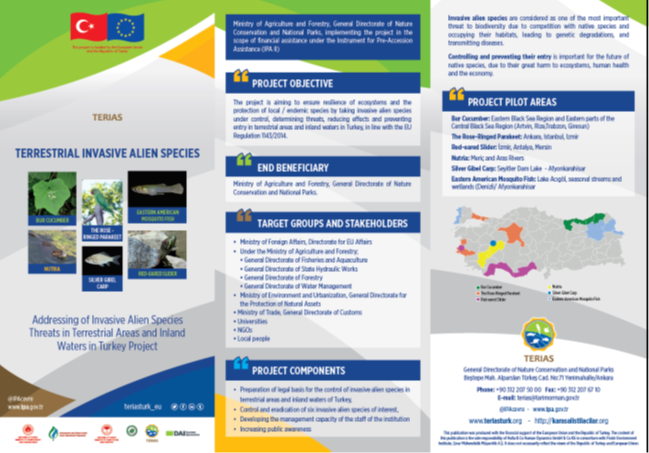 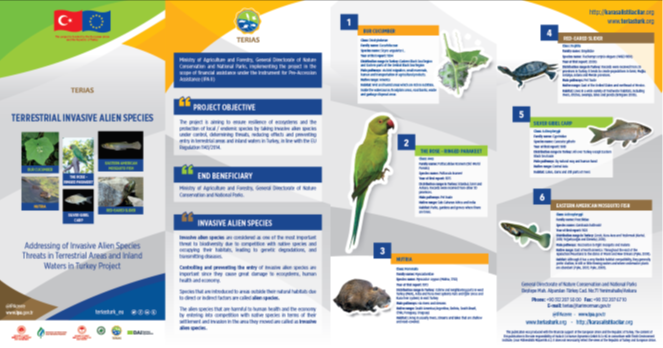 “Addressing Invasive Alien Species Threats at Key Marine Biodiversity Areas Project” or shortly “Marine Invasive Alien Species Project” is implemented by the General Directorate of Nature Conservation and National Parks of the Ministry of Agriculture and Forestry in cooperation with the United Nations Development Programme (UNDP) funded by the Global Environment Facility (GEF) to prevent, detect, control and manage invasive alien species aiming to enhance the resilience of marine and coastal ecosystems. 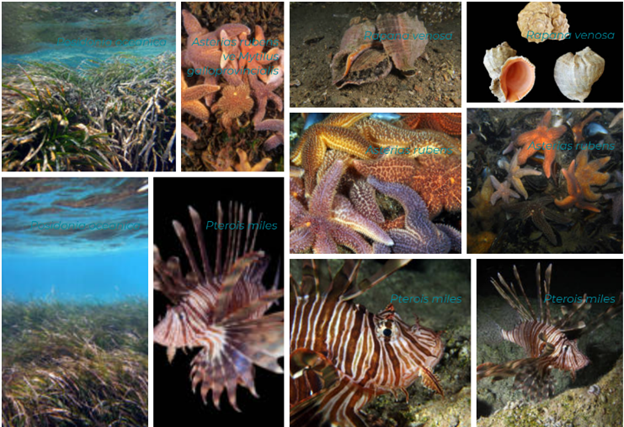